Our main campus is in Daejeon, a metropolitan city located in the center of South Korea. Travel from Incheon International Airport to the campus is easy and relatively short. The Airport Express and high-speed train (KTX) will transport you to Daejeon KTX station in about two hours. The campus is located very close to Daejeon KTX station, about a 20-minute walk or five-minute taxi ride.

Please contact us if you want to visit. We’ll guide you every step of your way to our campus, and even have our volunteer students meet you on the way if needed. 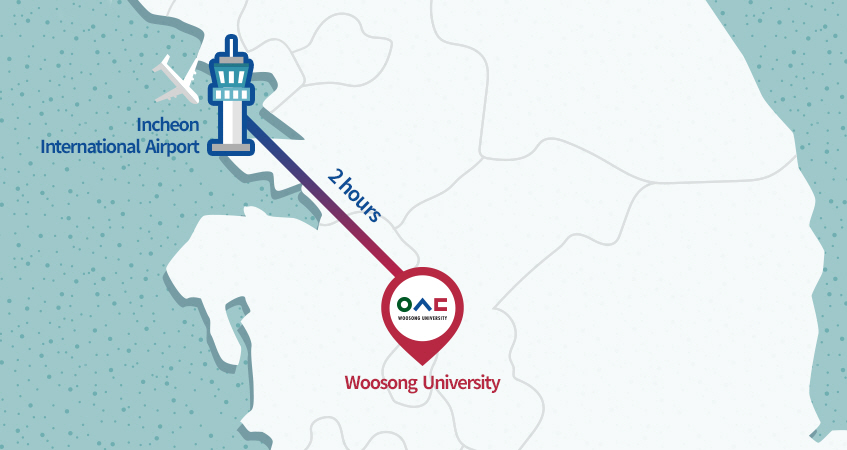 Daejeon is conveniently located in the heart of South Korea. Daejeon is a metropolitan city full of interesting spots to visit, but some of the most popular cities for tourism are also less than 2 hours away from Daejeon. It is only an hour train ride to Seoul, the capital and the largest city in Korea, and one and a half hours to get to Busan, the second-largest city, located on the southeastern coast with beautiful beaches. Jeonju, a charming city famous for traditional Korean architecture and cuisines, is only a 2-hour bus ride away. Your time in our main campus will be full of new activities, experiences, and opportunities to visit other cities.

The population of South Korea as of 2014 was 51.2 million (Ministry of Security and Public Administration). Seoul, South Korea’s capital and five other major cities (i.e., Busan, Incheon, Daegu, Daejeon, Gwangju, and Ulsan) have 20% and 25.5% of the total population, respectively. South Korea symbols include national anthem (Aegukga), national flag (Taegeukgi), and national flower (Mugunghwa). Its official language is Korean (Hangeul), with the writing system developed by King Sejong the Great in 15th century.

The economy of South Korea, named ‘Miracle of the Hangang River’, ranks 13th in the world by GDP in terms of purchasing power parity (PPP) and has highly developed industry sector constituting one third of the economy (OECD, 2015). Other sectors contributing about 40% to the economy include trade, transport, accommodation, communication, finance, insurance, and real estate (OECD, 2015)

South Korea also is known for rich cultural heritage with a number of its sites included in UNESCO’s Memory of the World Register. National music, folk dance, pottery, painting and calligraphy constitute traditional culture of South Korea. Hallyu or ‘Korean Wave’ refers to increasing popularity of Korean entertainment across Asia and other countries since the mid-1990s. Korean Wave has been associated with Korean drama, popular music, food, literature and Korean language.

Daejeon, the second administrative capital after Seoul, is located at the center of South Korea and is the fifth largest city, with a population greater than 1.5 million people. Since 1973, Daejeon has been the nation’s science and technology hub, due to substantial R&D potential concentrated in the Daedeok Science Town – the nation’s major innovation platform. Due to excellent infrastructure system and cental location of Daejeon, one can conveniently travel to any other destination.